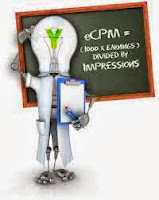 Unlike other forms of advertising such as CPC (Cost Per Click) and CPA (Cost Per Action), CPM does not require the visitor to do something other than visit the site. Due to this reason, CPM ads are the least expensive to buy. When a business buys these ads, they’re hoping that someone comes along and clicks the ad because that makes the investment worthwhile. This is why a website owner wants to make sure that the ad gets clicks, because, while views are what are for sale, if there are no conversions, the ad isn’t a good investment.

One of the kinds of advertising that CPM can be compared to is the type of ads that are sold in magazines. A magazine’s aim is to try to get as many subscriptions as possible. The magazine is guaranteeing to the advertiser that they have so many thousands of subscribers that will view the advertisement. The same applies for websites that sell CPM advertising. They are guaranteeing a certain number of views.
CPM advertising is an inexpensive way for a company to advertise on a website. Unfortunately, they are typically suitable only for larger sites because they can provide bulk impressions. The general hope is that when using CPM advertising, the ad will make an impression on the visitor’s eye and after a while, they will click on it. Even after the appearance of more sophisticated types of advertising, CPM is still around because it is inexpensive and very profitable for publishers. As only important thing is views, it becomes very practical and profitable for both parties.