Mobile advertising is such a nightmare these years, with terribly low revenue and click-through rates shares from mobile ad networks shares to publishers and developers revenue both commercial companies and indie developers. 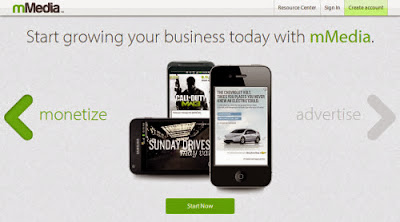 However, more and more remarkable advertising networks are rising, offering a great variety of monetization models to help developers maximize the revenue of their mobile apps, and yet most of us only know about AdMob. 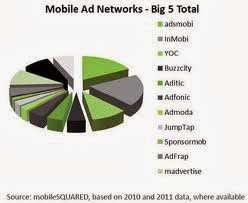 Mobile advertising is such a nightmare these years, with terribly low revenue and click-through rates crippling both commercial companies and indie developers.
However, more and more remarkable advertising networks are rising, offering a great variety of monetization models to help developers maximize the revenue of their mobile apps, and yet most of us only know about AdMob.

Being the child of the behemoth Google, AdMob should be the first advertising network for app developers to consider for monetization. What makes it a worthy platform here is probably not its brand, but its integration system a.k.a SDK (Software Development Kit) that helps you connect across famous platforms such as iOS, Android and the rising Windows Phone.
Given the strong coding nature of Google, the SDK allows you to choose from a wide range of ad formats for both mobile devices and tablets, including standard banner ads, interstitial (full screen) ads, interactive ads and exclusive custom search ads. Integration is far less painful with AdMob, as the documentation is clean and complete with recommendations for best practices.
However, tons of personal reports indicate that the eCPM or revenue on the AdMob is very low, and as usual, support is hard to reach. Apparently best integration does not mean maximum revenue, so you might want to try your luck with other reliable networks with dynamic monetization models such as CPI (Click Per Install).

As the first mobile advertising network that furthered itself to an Initial Public Offering (IPO), Millennial Media clearly knows how to do business, and offers lots of grand deals for developers ranging from top mobile gaming companies to indie teams.
The intelligence gathered from its many research probably makes Millennial Media a full-fledged self-service platform which not only offers publishing features, but advertising features that you could utilize to promote your apps.
You can create a client campaign that lets advertisers compete for your inventory within the respective categories – date range, targeting, pacing and pricing – and all transactions are reported inside its systematic dashboard. Millennial Media is also the loyal supporter of Ad Network Mediation that grants you the ability to display advertisement from other advertising networks, such as AdMob.
You can even allocate traffic across the networks by percentage, location, and ad revenue based on eCPM. The House Ads also helps you to cross-promote your lines of apps inside your own application. That said, it’s clear enough that Millennial Media is simply the best combination of advertisement and monetization for your app.

Adfonic cares not only about integration, it cares for the performance of your advertisement, with the promise of 95% average fill rates on both iOS and Android, and even up to 10x higher eCPMs with rich media advertisement. To achieve this, they are working directly with international agencies and brands such as Samsung, ESPN, BBS and Amazon Kindle to display their giant campaigns in your mobile app.
Adfonic also supports AdMob mediation to ensure your fill rate is exploding, and your maximum revenue is guaranteed. Built with the mind of supporting giant advertisers and publishers, Adfonic offers Ad Serving API that lets you customize the type of ads you request and specific ways they will be returned, for example XML, JSON, URL encoded or raw HTML.
You can even manage multiple accounts through a single platform, and access all publishers’ data through real-time reporting API and analytics dashboard. Though the flexibility is great, it could translate into lots of technical difficulties and confusion that may lead to possible revenue loss. Sometimes, less is more. Implement only what is necessary.

Standard mobile advertising networks are good, but when it comes to displaying ads on your game titles, they become hugely irrelevant due to the fact that the standard networks are targeting mass audiences with great variety of interests.
Chartboost is the solution for game developers, as it’s a platform that’s dedicated to advertise gaming ads, with up-to-par integration and analytics technology.Chartboost offers lots of creative solutions that are bent on heavy promotion and they are all done in a professional sense. They also optimize your eCPM while advertisers increase their bids to pump out the revenue number you will really like to see. You only need 5 lines of codes to make Chartboost start working for you.
The ads are mostly about downloading another new game, so it meets the interest of the audiences who are already playing games, and always seeking for the next fun factor.

In-App Purchasing has been a hot debate topic lately, with most mobile gamers arguing that they don’t want to pay repeatedly just to complete a game. But how about doing something to earn the in-game coins, such as downloading another free game?
That’s what Tapjoy is doing: offering the gamers the chance to earn virtual currency by performing real-world action. The model is called incentivized download.You give gamers the incentive (usually in virtual currency) to choose or download apps. In place, they can reap virtual rewards and premium content on 20,000+ games supported by Tapjoy in 1 billion network devices. Over 77 million monthly active users are on Tapjoy, so common issues like fill rate does not exist here.
What is an issue is that Apple is certainly not happy with the model, since the network has raised massive concerns about the gaming of the App store’s download chart. Apple has been banning this practice for all iOS apps, but Tapjoy gets around the rules by re-launching the system as a web application, which Apple cannot rule over.
If Apple hates it, you know that this is really an effective, even a bit dirty way to monetize and promote your game.

Aditic has a strong background in mobile advertising and marketing probably thanks to its parent company, Sofialys. The team has been working for over 6 years to develop idiot-proof platforms for mobile developers. As a result, the Aditic system supports iOS, Android, Blackberry, Samsung Bada and even Java with a nice range of ad formats including interstitial ads.

Admoda is a mobile advertising network that’s paying CPC, CPM and Flat Rates to its publisher, and they are promising you unbeaten fill rates and eCPMs in the industry. The integration is straightforward, but don’t fear even if you are new to the system, as their support system is filled by non-robots (aka humans) dedicated to solving your issues efficiently.

Thrive in the new app economy, as Flurry wants to help you generate more advertising revenue with its largest app data set on consumer usage in the world, collected from more than 700 million mobile smartphones and tablets! From this point you can observe that Flurry is really confident about the power of its analytics, as proven through its detailed analytics promotion page.

FLURRY FOR PUBLISHERS PRICING,
Flurry for Publishers is provided free of charge with no volume limits for basic ad serving and ad network mediation. Campaigns that utilize Flurry’s proprietary segment & demographic targeting features will incur a technology CPM as follows:

Hunt your revenue with 2 billion mobile users in HUNT Mobile Ads network, and it also equips you with standard hunter kits ranging from SDK to reporting tools, and reporting API to make sure you track down or catch the best ads for your mobile app or website.

inMobi originates from India, but this does not stop them from trying to conquer the international mobile advertising market. The stat proves their capabilities too, as they have so far reached 93.4 billion impressions in 165 countries with 578 million consumers, making it a considerable choice for any developer that desires successful monetization.

From the time you start sending the app ad requests from your app, the targeted Mobile advertising leader, Jumptap begins its operation to optimize your app’s performance and ensure your revenue could reach its possible maximum. It has also partnered with other data providers including datalogix to guarantee the best uses of your inventory.

Kiip operates a business model similar to what we called “incentivisation”, but calls it “rewarding”. The difference is that, instead of doing chores for virtual rewards you may not like, you can actually redeem real products, such as carbonated drinks and snacks!
Besides, the company is doing great in integrating this fresh idea with its sleek API and SDK, just as professional as other advertising platforms!

Established in 2008, Madvertise specializes mobile advertisement in Europe, especially German-speaking countries with technically unique services for both advertisers and publishers, such as Real-Time Bidding and rich media ad formats. Oh, and don’t be afraid of its premium web design yet, since it features open source SDK for simple integration.

Farewell to $0.01 CPCs. Over 10,000 publishers have been utilizing the MobFox advertising marketplace to help them earn up to 300% more revenue from their mobile apps.
On top of that, you achieve full control over the ads shown in your mobile, and with the eCPM control feature you are able to set minimum CPC/CPM floor limits at the price you desired.

As a Return Of Investment (ROI) driven company, MobPartner makes sure that you get the best revenue for your time spent on this mobile affiliate network.
The SDK helps you to display banner and text link from its CPA campaign, and you can also go for the advertiser route with CPI campaign, if you’re looking for some breakthrough in your download traffic!

What’s truly strong about MoPub is its advertisement format that could be summarized in one word: rich. Static images, HTML5 Ads, Banner, Landing Ads, Expand Ads, Interstitial Ads, Video and ORMMArich Media ads are always available for you to play creatively with your advertisement.

It’s not just about ad format, MoPub wants to drive more revenue, therefore they debuted MoPub Marketplace that allows bidders to quote prices for your ad impressions the moment they’re available, and take advantage of data to optimize their bids in real time. This results in precise ad targeting that drives even better ad app revenue for both parties.

Mojiva prides itself with its technology that crawls though the publisher mobile apps and catches relevant keywords using intelligent algorithms, then indexes them to empower the contextual mobile advertising system that eventually leads to the most important result: more earnings to you.
Be sure to register a website for your app though, since they do not accept free email accounts, such as Gmail.

Aligned with the terms flexibility, information and control, PlayHaven really lives up to what it offers. Not only can you monetize your app with control over the placement and frequency, you could also cross-promote other games and even request valuable user information to re-engage players outside your game.

RevMob is a rising Cost-Per-Install (CPI) network that offers the highest eCPM for game publishers. They offer various kinds of apps, and the technical integration is so easy that you just need to put 2 lines of code inside your app to earn your first pile of income from them.

The network also straightened up your integration mess by introducing SDK that supports game engine, including Unity and Corona.

Versatile platform support is enough to describe the dedication of Smaato. iOS, Android, Windows, Blackberry, Samsung Bada, Symbian, you name it, they got you supported. Their love for support has even expanded to their ad format that truly helps you to achieve virtually any type, and any behavior of advertisement you want.

You must know this?