Best CPA, CPI ad networks for gaming, and app installs offers to the mobile platform pay per install for publishers, developers, and advertisers’ monetary system. As our research about the social network advertising and cost per install in mobile app for android and iOS devices, twitter ads are the highest rate $2.53 among them. The key average cost per install on iOS app CPI in the US up to $2.07. Android app CPI in the US (Google Play market) – $1.72. Cost Per Install on Facebook Ads – $1.8. CPI.

Latin America is the highest mobile user’s in the whole world, The “CPI” cost per install average rate tariff for cheap mobile app campaign and revenues minimum investment and earnings profit $0.75 up to $2.59 with the global average rate – $2.24. 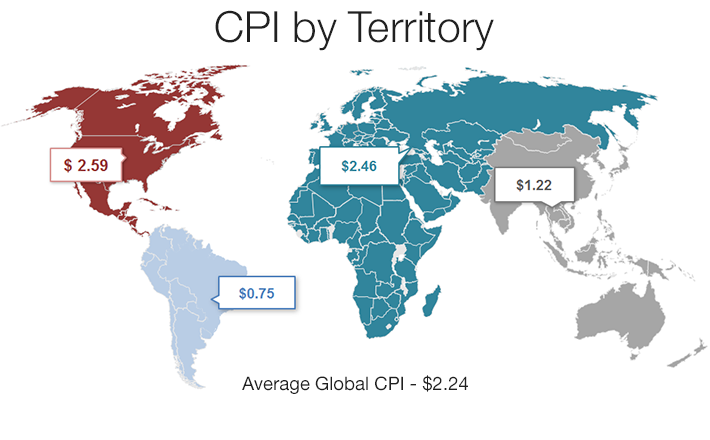 How To Market Your App in Latin America?

The effective average cost per install the mobile app for iOS apps its start $0.44 and $0.86 for Android apps. There are a few key things that need to be done to market your app in another region, and it’s actually fairly easy to do this for Latin America.

Unlike most regions, Europe for example, that are comprised of many different languages, Latin Americans speak one of two languages; Portuguese or Spanish. Both of these languages are fairly similar, so it shouldn’t be hard to find a decent translator that can help with app localization.

To get yourself out there, you may want to consider investing in Latin American ad networks. There are very many different platforms to choose from, a couple of examples being TAP-TAP Networks or Hunt Mobile Ads.

Once you’ve settled in on a Latin American ad company, you can hopefully start to see users pour in. Remember, the CPI should be a lot lower than for European or American app users, so you could be saving a decent amount of money on your investment budget.

Not All Mobile Ad Units are Created Equally,

There are over 100 different mobile ad networks today ranging from huge (think Ad Mob) to minuscule and everything in between. Adding an additional layer, all of these ad networks have different ad units you can purchase, from video to display to rich media. Complicating matters, even more, every network provides a different method for cost consumption – Cost Per Click, Cost Per Impressions, Cost Per Install, Cost Per View.

Let’s take a look at these different systems. The simple chart below compares three types of mobile ad units developers are using today for acquisition marketing (all rates are derived from industry articles or obtained through experimentation):

The critical number for developers and increasingly brands is the last one, Effective Cost per Install or e CPI.

For developers it should not matter whether you pay for installs, impressions, or clicks because at the end of the day what developers are looking for – what they need – is the install.
As you can see from above, based on average industry rates, the highest return on investment appears to be to pay based on CPI.

On the flip side, there are only a handful of CPI networks available and none with the scale of Admob or Millennial Media. This is the trade-off calculation you must understand to determine what the best app monetization.

Display ad networks and massive platforms, like Facebook, can add value when you are trying to drive scale for your business. While smaller CPI-based ad networks can be a great source for higher ROI and overall lower cost to acquire users. According to Buffer, the average cost per app install Facebook its starts $2.74 in the U.S. territory only.

The last thing to note is the difference in CTR and CCR of the three different ad units.
Even though Facebook’s mobile app install ads have the highest CTR and CCR, it doesn’t necessarily convert to the lowest eCPI.

Notice also that both the FB ads and the app wall have higher CTR and CCR than display. We believe the reason for this difference is the difference in native ads vs. generic ads. From our experiences with the app walls and other native ad units, an immersive ad experience that facilitates discovery seems to increase the likelihood of both engagement and conversions.

Anecdotally we have also seen that further down the funnel conversions like Facebook connects and in-app purchases are greater with native ads as well. Keep this in mind especially when you are considering ad network purchases on a CPM or CPC basis.