The media advertising based on video television broadcast, stay strong dominating the digital media marketing, especially on tv ad cost. Most of the television commercial ad agencies offer to valued brand advertisers by CPM basis or you will be paid for every thousand impression drive traffic impact to your brand or services.

In the United States, there are top 10 leading channels on television shows driving advertisements based on broadcasting campaign TV ads with an average cost to advertise start $190,000 – $700,000 for 30-second ad spot shows on national TV advertisement charge by commercial agencies.

According to tracking firms in the TV space, 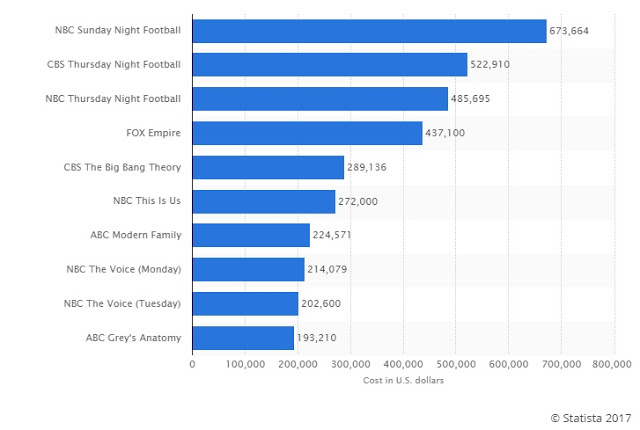 How to calculate CPM for TV ads?; when running a 30-second spot on the average network prime-time show with a minimum budget of $110,200, at a $25 cost per 1,000 homes. The factor in the significant number of viewers who are DVR-ing the ads – let’s even be conservative and say 25% of viewers skip ads – and the true CPM cost is a lot higher.

Contrast that with recent announcements that popular shows channels are now making preroll RTB video ads available on their full-episode players. What do televison CPMs for the online episode players look like? The latest pricing based on  CPM tv start $21 to $30 CPM range, or significantly lower than running on TV. Video with professionally produced content is an even better deal with average CPMs of $11 to $20. 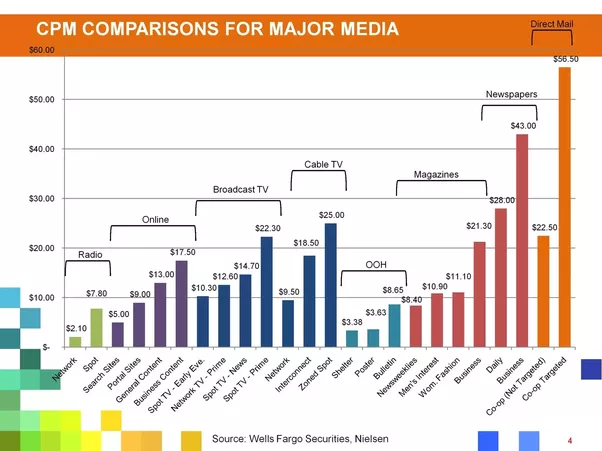 How to Calculate the CPM for Television?

To calculate advertisement on television investment can be a costly endeavor, but it is a great way to get your product seen by lots of people at once. The best way to know if you are getting your money’s worth is to calculate the CPM basis of your ad campaign. CPM is an acronym for cost per mille or cost per thousand impression, which means the cost of getting your ad in front of every 1,000 people. To determine how much you are spending on your advertising space per eyeball, use a few simple figures to ascertain your CPM.

The best way to get an accurate CPM for a television advertisement is to know how good the ratings are of the television show with which your ad plays. Nielsen ratings are the golden standard for estimating the popularity of a television show. The average for a network series is 11 percent of the television-owning American population, which is estimated to be 94 million households, according to the Museum of Broadcast Communications. That means a show with ratings of 11 percent reaches 10.3 million people. The more popular a show is, the more expensive advertising even social advertising around it will be. A less-expensive example would be a show that is seen by 5 million people.

The equation on how to calculate CPM pricing for TV ads? If your ad is featured next to an average television show that garners 5 million viewers, then you can use that figure to determine your CPM when you compare it to the price of advertising. First, divide the viewer number by 1,000, since you are calculating the cost of one thousand viewers. The amount you are working with now is 5,000. If you buy a single thirty-second advertising slot for $10,000, then divide that price by 5,000 for a CPM of $2. This is the cost per 1,000 people if you buy $10,000 of ad time during a show that gets 5 million viewers.

Making the Most of Your CPM

The best way to get a good deal on television ad time is by purchasing in advance. Once a year, typically in May, networks sell advertising slots for the upcoming international television season at what is known as the upfront market. You are taking a chance by buying in bulk for a network that will be testing out new series in the fall, but often there are some guarantees. If a network fails to attract the ratings they promise to advertisers, they run free commercials to make up for it.

The Future of CPM

With the evolution of technology that delivers media over the Internet, there have been the beginnings of big changes with analyzing television show ratings. Any new method of counting viewers will have an effect on determining CPM. A Microsoft patent on Nov. 1, 2012, reveals that XBox Kinect machines are being created to count viewers in the room.

This may be used to charge viewers by how many people are watching, rather than by household. Regardless of whether household televisions or viewer totals will be used to determine ratings, using that number to calculate CPM for a television advertisement will likely remain the same.

How much does a 10 – 15 seconds commercial cost? Producing advertisement based on local, international, is very expensive but one of the most effective commercial eye ball techniques in digital media advertising. Base on 10- 15 secs commercial ad spot advertisement is a lower rate than other greater minute of your video ad stream. Typically you will be charged $5 for every 1000 house hold viewers of your campaign in ordinary time. Charges my changes depend on prime time spends, 6 – 8PM is the highest rate in tv ads commercial time. The more popular tv shows the highest investment cost rate.

1) A TV commercial needs to be produced.

2) The TV ad needs to be broadcast.

If you have a fixed budget, you can spend less on the production and more on getting the message out on the airwaves. Conversely, you could spend a bigger chunk of the budget on the production of the commercial and spend less on the broadcasting. For most advertisers, the budget is dependent upon an evaluation of short and long-term business objectives.

Broadcasting costs can be as cheap as $25 for 30 seconds in a small market, or thousands of dollars in large markets.

National TV advertising is more expensive. Although some of the biggest brands may spend millions of dollars for a 30-second spot on the Superbowl, a more realistic number would be in the six figure range for 30 seconds on national TV. Conversely, local TV can be surprisingly economical. If you are a local or regional company and you aren’t selling a product or service to a national market, then the decision is simple: buy local TV advertising. A local commercial on a local station at 2:00 am can run as cheap at $25 per 30 seconds. However, 2:00 in the morning may not be the best time to advertise your product or service, although it can be inexpensive.

There are a number of factors that determine the cost of broadcasting a TV ad. Such variables include the region it will be aired (some areas are more expensive than others); time of day; day of week; quantity of viewers; length of the commercial (15 sec, 30 sec, 60 sec or a 30 min infomercial); and how frequently the ads will run.

More fundamentally, the cost of a 30-second spot varies according to the number of viewers expected to be watching it.

To throw out some ballpark numbers on the low side, which would pertain to many small- to mid-sized businesses, a 30-second time slot in a medium-sized market can be purchased for as little as $5 per 1,000 viewers.