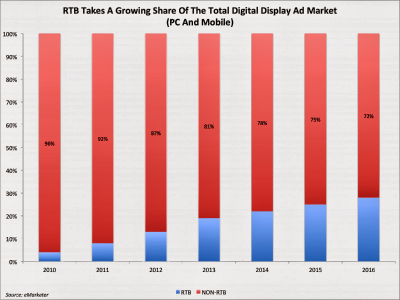 Based on a more rapid maturation of the mobile RTB space than was anticipated, last year’s U.S. forecast for mobile RTB of $273 million by 2016 has been reforecast to $1.9 billion –
Video sales over RTB will grow to $1.7 billion in 2017.

The white paper notes that RTB has significantly impacted the way in which digital inventory is traded. With the substantial benefits of automation, integration and optimization, the RTB revolution is upon us. As long as both publishers and advertisers continue to reap the benefits, it’s clear that RTB will be adopted globally.

Research and analysis for the IDC Report was led by Karsten Weide, Program Vice President, Digital Media and Entertainment, and gathered by IDC through multiple sources including in depth interviews with senior online advertising industry executives in the U.S., UK, Germany, France, Japan, China and India.

RTB is a style of programmatic buying in which digital advertising opportunities are auctioned off in real-time. It should allow ad buyers to take full advantage of mobile’s virtues — the ability to target potential customers according to demographics, location, and context.
RTB should help sellers effectively monetize the huge, and growing, mobile audience.

Digital advertising what high-frequency trading is to Wall Street. It involves computerized, algorithm-driven trading that allows for quick buying of ad impressions according to pre-set parameters.

On the desktop, programmatic or automated buying of display ads has already made huge inroads. Its advocates say that it has led to a more transparent and efficient digital ad market. But it is in mobile where programmatic buying may make the most difference. That’s because smartphones are advertising platforms that we carry in our pockets, and with RTB that means marketers can reach us in real-time, and target potential customers according to location and context.

In a recent report from BI Intelligence on real time bidding (RTB), we analyze how it may help solve the mobile advertising CPM problem, detail its recent impact and successes on ad buyers and sellers, examine the potential obstacles to its widespread adoption, and look at how the holy grail of mobile advertising — controls and efficiencies — may be reached through its use.