To Calculate CPM , Marketers first state the results of a media campaign (gross impressions). Second, they divide that result into the relevant media cost. 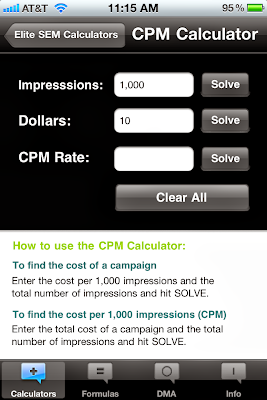 Online Advertising – If a website sells banner ads for a $20 CPM, that means it costs $20 to show the banner on 1000 page views.
While the Super Bowl has the highest per-spot ad cost in the United States, it also has the most television viewers annually. Consequently, its CPM may be comparable to a less expensive spot aired during standard programming.

CPM  Calculator Metric – is to compare costs of advertising campaigns within and across different media. A typical advertising campaign might try to reach potential consumers in multiple locations and through various media. The cost per thousand impressions (CPM) metric enables marketers to make cost comparisons between these media, both at the planning stage and during reviews of past campaigns.

Marketers calculate CPM by dividing advertising campaign costs by the number of impressions (or opportunities-to-see) that are delivered by each part of the campaign. Thus, CPM is the cost of a media campaign, relative to its success in generating impressions to see. As the impression counts are generally sizeable, marketers customarily work with the CPM impressions. Dividing by 1,000 is an industry standard.

The Search Engine Marketing Professionals Organization (SEMPO) defines eCPM as: ::A hybrid Cost-per-Click (CPC) auction calculated by multiplying the CPC times the click-through rate (CTR), and multiplying that by one thousand. (Represented by: (CPC x CTR) x 1000 = eCPM.) This monetization model is used by Google to rank site-targeted CPM ads (in the Google content network) against keyword-targeted CPC ads (Google AdWords PPC) in their hybrid auction.

In internet marketing, effective cost per mille is used to measure the effectiveness of a publisher’s inventory being sold (by the publisher) via a CPA, CPC, or Cost per time basis. In other words, the eCPM tells the publisher what they would have received if they sold the advertising inventory on a CPM basis (instead of a CPA, CPC, or Cost per time). This information can be used to compare revenue across channels that may have widely varying traffic—by figuring the earnings per thousand impressions.