Canada is the center of eye in United State Marketing and Advertising combinations of one affiliation partnership of Digital advertising rates and products demand data feasibilities. Canadian Advertising laws guidelines designed to regulate advertising in Canada to regulate anti-competitive practices in the marketplace, such as price fixing and misleading advertising.

Internet Revenue Levels and Share in Canada vs Other markets

Canada’s Internet advertising market grew up to 31% share of measured major media advertising revenue in 2013, up from 28% in 2012, exceeding the U.S. Internet’s 25% share in 2013. The major media revenue total (base) for each country is based on six channels: Internet, Television, Radio, Dailies, Magazines and Out-of-home. Note: The Internet’s share of US major media revenue is lower than in Canada, due to TV’s much higher share in the US (43% in 2013)
than in Canada (30%). Differing media landscapes, survey methodologies & data providers may also cause some of the observed differences. 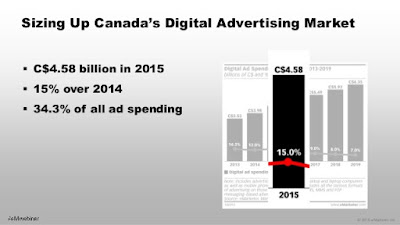